Second Lieutenant the Rev. Dugald McArthur, born March 1886; educated at Glasgow University (MA 1908, BD 1911); Ordained, 13.5.1913, and served as Minister of New Androssan Parish Church, Dumbartonshire;
Commissioned Second Lieutenant, Royal Highlanders, 5.9.1916; served with the 2nd Battalion during the Great War in Mesopotamia from 22.3.1917; died of wounds received during the attack on the Turkish Redoubt at the Battle of Istabulat, 21.4.1917, and is commemorated on the Basra Memorial, Iraq.
Its is believed he was killed in action at the same time Charles Melvin won his Victoria Cross in the following circumstances.
'871 Pte. Charles Melvin, R. Highrs. (Kirriemuir) - For most conspicuous bravery, coolness and resource in action. Pte. Melvin's company had advanced to within fifty yards of the front-line trench of a redoubt, where, owing to the intensity of the enemy's fire, the men were obliged to lie down and wait for reinforcements. Pte. Melvin, however, rushed on by himself, over ground swept from end to end by rifle and machine-gun fire. On reaching the enemy trench, he halted and fired two or three shots into it, killing one or two enemy, but as the others in the trench continued to fire at him, he jumped into it, and attacked them with his bayonet in his hand, as, owing to his rifle being damaged, it was not “fixed." On being attacked in this resolute manner most of the enemy fled to their second line, but not before Pte. Melvin had killed two more and succeeded in disarming eight unwounded and one wounded. Pte. Melvin bound up the wounds of the wounded man, and then driving his eight unwounded prisoners before him, and supporting the wounded one, he hustled them out of the trench, marched them in and delivered them over to an officer. He then provided himself with a load of ammunition and returned to the firing line where he reported himself to his platoon sergeant. All this was done, not only under intense rifle and machine-gun fire, but the whole way back Pte. Melvin and his party were exposed to a very heavy artillery barrage fire. Throughout the day Pte. Melvin greatly inspired those near him with confidence and courage.'
Pair Correctly impressed  = 2. Lieut. D. Mc Arthur 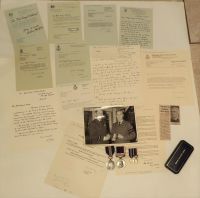