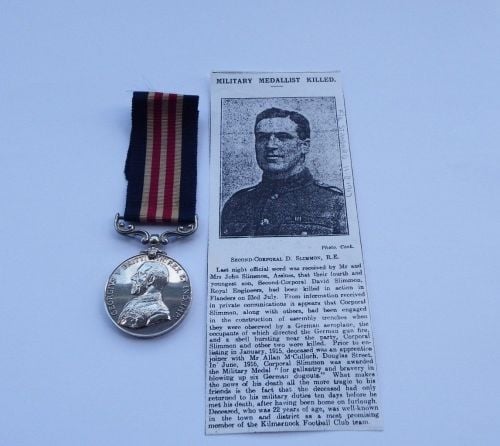 David Glencross Slimmon was born in Kilmarnock, Scotland on the 2nd of August 1895. The son of John and  Mary Slimmon of Assloss Mains, Kilmarnock.
Slimmon was a Professional Footballer who played as a left-back. He made appearances for Dumbarton and Kilmarnock between 1913 and 1916.
The Great War interrupted his playing career as David served with the 1/1st West Almncashire Field Company (T.F.) Royal Engineers. He landed in France on the 8th of August 1915.
He was awarded the Military Medal which was gazetted on 23rd August 1916. The Kilmarnock Herald and North Ayrshire Gazette published the following article on 4th August 1916.
'Former Kilmarnock Football Player Gets Military Medal'
Sapper Slimmon formerly a member of the Kilmarnock football league team was awarded the Military Medal, and in a recent letter, a friend in Kilmarnock says:-
" While having a two days rest, I had the honour of being called out before the whole company and awarded the Military Medal. I have not been decorated yet but will be in a few days. It will be my first honour, and a ribbon, and will be the first in the company to get it. Two of the old hands have the D.C.M, but I think this is better than it, for you can get the D.C.M. for many a little thing, while the military medal is only given for gallantry. On the paper that was read out to the company, it says:- ' For coolness and bravery in bombing and blowing up German dugouts. ' I am in the best health, but a bit sore with two days of marching'
David was tragically killed in action on 23rd July 1917 when he was hit by shellfire directed by a German Aircraft. He was laid to rest in Hop Store Cemetery, Ieper, Belgium.
The Sunday post on Sunday 12th August 1917 published the following article.
" Kilmarnock Player Killed"
'Offical intimation was received this morning of the death in action on 23rd of July, of Second Corporal David Slimmon, Royal Engineers, who was a regular playing member of the Kilmarnock League team. Corporal Slimmon was a local lad and as a juvenile played for Kilmarnock Hazelbank and the victoria. After a season and a half with Auchinleck Talbot, he was signed by Kilmarnock at the beginning of season 1914-15. The Corporal was a young back full of promise.
In January 1915, he enlisted in the West Lancs. Royal Engineers and the last time he appeared for the club was against St Mirren in the new years Day match of 1916. The following June Corporal Slimmon was decorated with the Military Medal " for gallantry and bravery in blowing up six german dugouts" Corporal Slimmon was twenty-two years of age.
MM = 7544 SAPR D Slimmon 1/1 W Lanc F CO RE TF
Condition = GVF (offical corrction to inital)