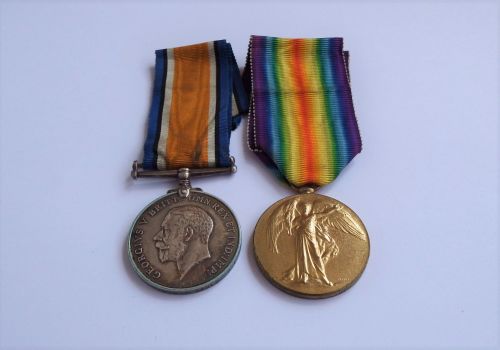 Sold, Please contact us with your details and we'll contact you when similar items come into stock!
Richard Douglas Gauld was born in Ormskirk, Lancashire on 22nd August 1896.
He was educated at  Holt Secondary School from 1908 to 1914 and Liverpool University ( B. Eng Degree) 1914-1916.
During the Great War he served in the Royal Engineers;  Inland Water Transport section. Gauld served in German East Africa between 1917 and 1919. The pair is his sole entitlement.
He survived the war and back in civilian life worked in the Engineering departments of various railway companies, including the London Underground and Dublin S.E. Railway. During his time with the London Underground, he was responsible for the running of the machine shop and Blacksmiths, overseeing 28 men.
He drowned in Cockermouth in 1936 as the result of an accident. The following newspaper article was published in The Western Daily Press on 30th December 1936.
BROTHER'S REPLY  TO  CORONER'S COMMENT.  Men Drowned When Bridge  Collapsed.
A man described at a Workington, Cumberland,  inquest yesterday how he and two companions were carried down the river  Derwent by the wreckage of bridge for nearly a mile before the other two were lost and drowned.  The inquest was on Richard Douglas  Gauld (40), single, a civil engineer, of  Buxton Road. Disley, Cheshire, who was working on a half-demolished bridge at  Brigham, near Cockermouth, on December  16, when it collapsed.  The body of Alec Riddett, a railway foreman,  of Barrow-in-Furness, the other victim,  has not yet been recovered.  Robert Burns Mitchell, a charge hand plater, of Barrow-in-Furness, said: "  I pushed Gauld's plank, and it caught on a  bush. I thought Gauld was safe. One was carried on, and I pushed three or four planks towards Riddett, telling him to get on top them, but he was handicapped by his overcoat. I used a piece of wood as a  paddle and managed to get to the bank."  "Good, But Inadequate,"  An engineer said that the method of  taking down the bridge was to truss the  inside of the bottom boom to form a girder  to support the remaining dead weight of the  bridge when the top boom was cut  The coroner (Mr D. J. Mason: The idea  was good but inadequate. It was an error of judgment on the part of Gauld.  Mr William Gauld ( brother): I don't think we have sufficient evidence to come to that conclusion.  It was stated that Mr Gauld was an experienced engineer, a Master of Science at Liverpool University, and all his work was satisfactory.  The coroner, recording a verdict of  "Accidental drowning," said: "Much bravery was shown to try to save and recover the bodies. We are always proud  to know that there are people ready to risk  their lives for others."
Correctly impressed 293753 Cpl R D Gauld RE
Condition NEF