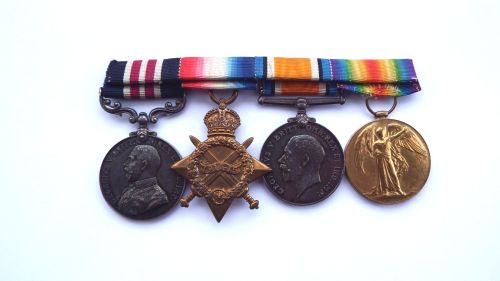 Sold, Please contact us with your details and we'll contact you when similar items come into stock!

John William Tankard was born in Pool in Wharfdale, Leeds, in 1896.

At the time of the 1911 census, he was working as a Clerk in a Woollen Mill. He attested for the Territorial Force on August 4th 1914, giving his age as 18. His trade was now a self-employed Butcher. His unit on joining was 4 WR (How) Brigade RFA (T). He had previously been a member from May 4th 1910 until June 1914.

Tankard landed in France on April 15th 1915. He was disciplined on several occasions for minor offences such as lateness and was confined to barracks as punishment. In the field, his offences became more serious. On September 20th 1915, he failed to comply with a ‘battery standing order’ and ‘used obscene language’. He was awarded seven days Field Punishment No 1. One day after finishing this, he was awarded a further seven days field punishment No2 on September 28th, after he was caught in a storeroom eating bread, after once again ignoring an order.

The award of the Military Medal was announced in the London Gazette on November 11th 1916. Obviously, with no citation, it cannot be confirmed what the award was for. However, Captain William Barnsley Allen, V.C. D.S.O. M.C & Bar was attached to 246th West RFA, when he won the Victoria Cross on September 3rd 1916. The citation is as follows;

‘For most conspicuous bravery and devotion to duty. When gun detachments were unloading H.E. ammunition from wagons which had just come up, the enemy suddenly started to shell the battery position. The first shell fell on one of the limbers, exploded the ammunition and caused several casualties. Captain Allen saw the occurrence and at once, with utter disregard of danger, ran straight across the open, under heavy shell fire, commenced dressing the wounded, and undoubtedly by his promptness saved many of them from bleeding to death. He was himself hit four times during the first hour. By pieces of shells, one of which fractured two of his ribs, but he never even mentioned this at the time, and coolly went on with his work until the last man was dressed and safely removed. He then went over to another battery and tended a wounded officer. It was only when this was done that he returned to his dug-out and reported his own injury.'

Information found online suggests that Tankard could have been in this action, but I have no concrete evidence to prove this.

Tankard survived the war and was discharged in 1919. He returned to the village of Pool in Wharfdale and resumed work as a butcher. He was active in the local cricket league and later became an umpire. Billy, as he was known, passed away in 1964.