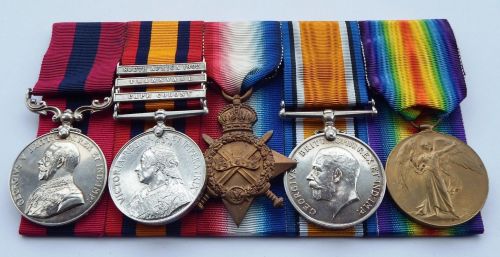 William Edward Large was born at Davenham, Northwich. He worked as a Labourer and served in the 2nd Volunteer Battalion of the Cheshire Regiment. He joined the Grenadier Guards at London on 16th June 1890, aged 18 years

He had reached the rank of Lance Sergeant by July 1895; however, he was found drunk and tried by District Court Martial. Large was found guilty and stripped of his rank, being demoted to Private. He was transferred to the Army Reserve in June 1897 after serving for seven years; his rank at discharge was Lance Corporal.

Large was recalled for active service from the reserves on the outbreak of the Second Boer War. He served with 3rd  Bn, and for his second period of service, Large was awarded the Queens South Africa Medal with clasp Cape Colony, Transvaal and Orange Free State.

He was discharged on 21st July 1902 upon his return from South Africa.

On 7th September 1914, Large attested for the Cheshire Regiment and was immediately made Corporal; less than a month later, he was promoted to Acting Sergeant. Posted to the 9th Bn, he landed in France on 19th July 1915 and was promoted to Sergeant on 18th December 1915.  He will have been present on the Somme in 1916 at La Boiselle, at which time he was serving as Company Quarter Master Sergeant.

The official history for the Cheshire Regiment states that he was decorated for a specific act of bravery on 10 July 1917, but his DCM was announced in the London Gazette on 1st January 1918 with the following citation.

‘For conspicuous gallantry and devotion to for over two years. He has always rendered invaluable services during many active operations in personally supervising the taking up of rations, often under very adverse conditions, and has set a fine example to all ranks.’

Large became a Chelsea Pensioner after the war and died on 19th October 1938.