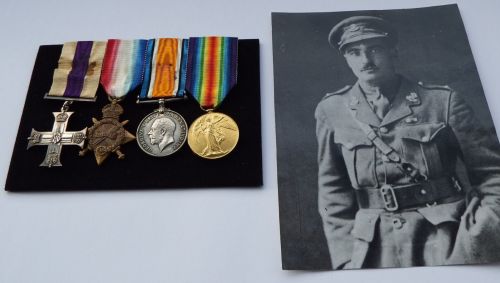 Sold, Please contact us with your details and we'll contact you when similar items come into stock!
GV Military Cross, engraved on the reverse - 2nd Lt J W Simpson 20th KLR Mercutel Arras 9th April 1917.
1914/15 Star, correctly impressed - 3577 Pte J. W. Simpson. L'Pool R.
Pair, correctly impressed - 2. Lieut. J.W.Simpson.
Condition - NEF
John Wyckliffe (Wyck) Simpson was born in Liverpool in  1893, the son of James and Florence Simpson. He was educated at the Collegiate School, Liverpool, where he captained the football team.
A keen sailor in his spare time, his father James was one of the founding members of the West Cheshire Sailing Club. In the 1914 Royal Mersey Regatta, he won a Silver Cup in the three-quarter rater yacht 'Carina'. Wyck worked for the Liverpool branch of the Royal Insurance Company; he left his position in September 1914 when he attested and joined the 10th Bn ( Liverpool Scottish) Liverpool Regiment.
After four months of training, he landed in France on 23rd January 1915 with the 1st replacement draft. He fought with the 10th Bn at St. Eloi, Hill 60 and the 2nd Battle of Ypres, where he was wounded at the famous action at Hooge on 16th June 1915. Wyck was wounded during the advance, taking bullets through the arm and lung; he received emergency treatment on the battlefield from Captain Noel Chavasse, V.C. and bar. M.C. He was evacuated and spent a year recovering from his wounds.
Wyck was discharged to a commission on 26th October 1916 and gazetted as a Second Lieutenant, joining the 9th Bn. He was attached to the 20th Bn ( Pals Bn) and was posted back to the Western Front. He saw action in the early spring and was awarded the Military Cross for bravery at Arras on 9th April 1917. The M.C. was gazetted on 18th July 1917;
'For conspicuous gallantry and devotion to duty. He led his platoon with great coolness and ability throughout the barrage although it suffered heavy casualties. Finding himself almost without men, he took command of another platoon and reorganising, the two attacked together.’
2nd Lieutenant Simpson was sadly killed in action on 1st August 1917 at Passchendaele; his body was not recovered. All the stretcher-bearers who tried to reach his body fell. He is remembered on the Menin Gate.
An obituary for Wyck appears in The Liverpool Scroll of Fame;
The Colonel narrates, “He was leading his platoon just in the same way as he would lead the battalion football side, always a cheerful word, and encouraging his men. Loved by his brother officers and men, the battalion has lost an officer whose place it will be impossible to fill.”
The Company Sergeant Major records “I have been in action with Mr Simpson several times, and know the N.C.O’s. and men had the greatest confidence in him as their leader, and on the occasion when he won the Military Cross I have seldom seen anyone cooler or more determined under very heavy shell and machine gunfire. It is hardly too much to say the men almost worshipped him.”
On behalf of the platoon, the Lance-Corporal wrote “Mr Simpson was our platoon officer, he was a gentleman and a hero. The platoon was stunned when they heard of his death, and we all miss him terribly, but we all thought it our duty to write to you as we all thought so much of him.” 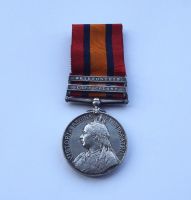